I’m getting into this book: 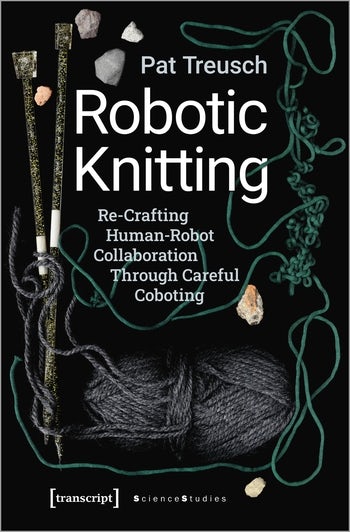 As a reaction to typically dead-end debates on future human and robot collaboration that tend to be either dismissive or overly welcoming towards »cobot« t... | CUP

It’s got me with this from Haraway on the ‘cat’s cradle’ game:

Adopting the game of cat’s cradle, she underlines the possibilities of generating new thoughts, but also new ways of coming to matter through string figuration. Cat’s cradle is a game of producing string figures by passing loops of yarn between players. It is a practice of producing pat- terns with yarn. Further, she most popularly coined the game of cat’s cradle as an “everyday analogy” (Lykke 2010, 155) for the technofeminist analytical tool and methodology of diffraction. Haraway (2013, 1) takes the movements of the yarn to develop a method of thinking which she describes as in the following: “Relays, cat’s cradle, passing patterns back and forth, giving and receiving, patterning, holding the unasked-for pattern in one’s hands.” This description illuminates the ways in which yarn is a navigational tool, which one can follow, while at the same time, it is never possible to control the yarn fully and predict what will happen, how the yarn will form patterns of entangling and knotting. The yarn plays not a passive role in string figuring, but rather an active part.

I remember playing this with my sister when I was young, being amazed by the different patterns emerging, but only being able to get a few steps before getting in a table, but knowing there were more steps to do… I’m going to have to try it again!

This book looks great though!
http://www.stringfigures.info/cfj/

Ah nice inventory!
It became again quite fashionable in France/Belgium these past years with the brand Ztringz who sells rainbow strings to do that. They made a lot of videos to make patterns: https://www.ztringz.com/nl-be/ztringz-academy. I didn’t know that this was called Cat’s Cradle!
I’ll put my daughter on that book

Heh that’s funny that it’s a commercialised craze in France! Reminds me of ‘loom bands’ that were literally everywhere some years ago (you could buy hundreds for very little money and kids dropped them in the streets…).

Very interesting! I recently fell into that well too, from graphic research I was conducting and later making the connection with Haraway’s writings. Will certainly be interested in whatever comes up on this thread!