Somehow I don’t think we’ve talked about change ringing and in particular method ringing of bells here yet, here’s a thread!

I’d love to know more about the history/origins of change ringing, it’s one of the stranger traditions kept alive in the UK, where people explore permutations by ringing a set of bells. This includes in church towers, where even very large bells are weighted such that the timing can be adjusted in between rings.

You can see the bells swapping, as they travel backwards and forwards through each iteration of the sequence, pausing at either end when changing direction. In this example the pattern repeats every 12 permutations, but they can get much longer. Here’s a plaque commemorating the complete peal of 9020 changes of the ‘grandsire cinque’ seemingly over 12 bells, over 6 hours and 17 minutes: 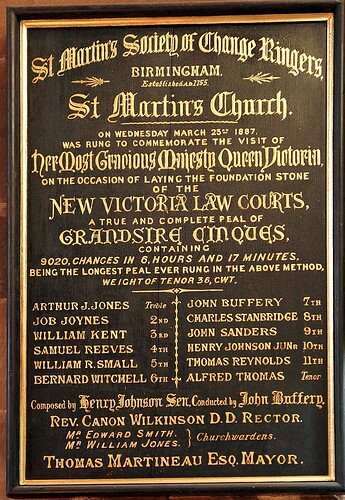 The ringing.org website seems a great resource, and has a page on the Grandsire Cinques, although that version has ‘only’ 207 changes. I’m not sure of the discrepancy, perhaps it’s related to the number of bells.

update The wikipedia page says that a complete peal is where every permutation is played exactly once. With 7 bells that would be the factorial i.e. 5040, or with 8 that would be 40320 changes… So I’m still not sure where the 9020 changes come from.

Anyway I have a lot of unanswered questions about this (e.g., how does the mechanics of the bell influence the pattern, why do people do it, how do they take care of ‘physical needs’ during a peal, etc) so if anyone knows more/finds references, please share!

Digging into ringing culture a bit more, there’s a lot of interesting software, including multi-user virtual bell ringing websites. Anyone interested in having a go?

I’m a former church bellringer, iduring my teens, at St Wilfrid’s, Kirkby-in-Ashfield, which had a set of 6 bells. We rang every Sunday morning before the service, for weddings, and occasionally for other things (funerals, remembrance services). Ringing for weddings was a nice source of pocket money, especially in the summer when you might have 4 weddings in one day. I used to live directly opposite the church, which was convenient, and so I had one of the keys to the church, a heavy old cast iron key around 6 inches long that opened a side door.

I rang a couple of quarter peals (on 6 bells, I think, maybe 8), but never a full peal. I also ruined one attempt at a quarter peal, when I lost my place right near the end and couldn’t recover. Quarter peals are short enough to cope without needing a break. Not sure how they manage with long peals - in theory, you could swap over with someone, but that would be risky: the bells are heavy, and could easily drag you up to the ceiling if you got caught on the rope. I got pulled up once, like most beginners, when I broke a ‘stay’ - the wooden beam, usually around 1 metre long and as thick as your arm, which prevents the bell from swinging round more than 1 full stroke (usually, each bell swings all the way round and then back again). When that breaks, the bell can keep swinging, and the rope gets reeled in on the wheel. If you don’t let go quick, you get hoisted into the air.

It’s more of a mental challenge than a physical one. Understanding and remembering the pattern, and having to follow what the others are doing so you know your place. It’s interesting that although you definitely listen in order to play in time, following the changes for a method or responding to called-out changes requires more visual concentration on what the others are doing.
[edit to clarify and add a bit:] The mechanics of the bell determines the methods like a mathematical ‘set’: because each bell has to play once each round, you can’t just play any old tune, since you can’t choose whether or not to play a note. Similarly, the tempo is very restricted - you could ring a bit slower or faster, but that’s limited by the natural swing of the bell. Towers with many bells may have to ring closer together (shorter intervals between bells), in order to ring each one in a round (one ‘round’ = one row of the diagram above - each bell ringing once). This physical limit is also why methods are limited to single-position changes between rounds - because you can only delay or speed up a certain amount.

To ring methods, you use visual patterns like the one above, but marked with two lines: a red line for the treble bell (the first / lightest) and a blue line for one of the other bells - usually the 2nd. In Plain Hunt, pictured above, the pattern is simple diagonals, meaning you move places each round, except for the 1st and last positions where you stay for one more round before moving back in the other direction. That’s the simplest method. ‘Hunting’ is moving positions steadily back and forth. In contrast, a ‘bob’ is a kink in that pattern, reversing direction for one round and then going forward again. For some methods, the treble bell pattern is different to the rest - it may just do plain hunting while the others do more complicated stuff. Either way, the blue line pattern is the same for all other bells, but they just start in different places along it. If the blue line shows the 2nd bell, then the 3rd bell can follow the pattern from a specific point further down the diagram (in the diagram above, that would be row 5, where bell 2 is is in 3rd position and travelling towards the back).

I’ve been meaning to run some change ringing methods as Mathematica programs and then make some sounds with it, but never got it started properly…

Also, in case useful, there is https://gitlab.com/rd--/hmt/-/blob/master/Music/Theory/Permutations/Morris_1984.hs.